I went along to a motorkhana today held by the Holden Sporting Car Club out at Willowbank west of Brisbane.

The club is a multi make club (there was actually only one or two Holdens out of nearly 50 cars).

I had an absolute ball (as well as a lot of nerves to start with!) and everyone was really friendly and welcoming.

Here's a couple of pics of my car waiting to go - the Evo in the foreground is an absolute weapon (see vid below) and the white chaser was very entertaining and very well driven. 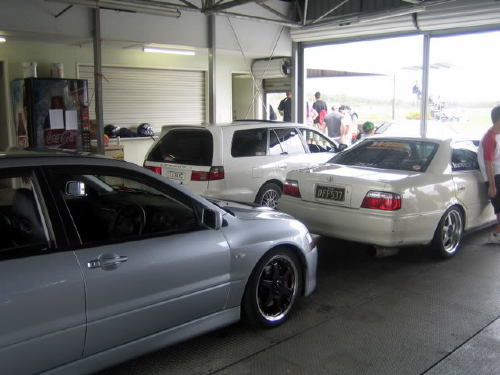 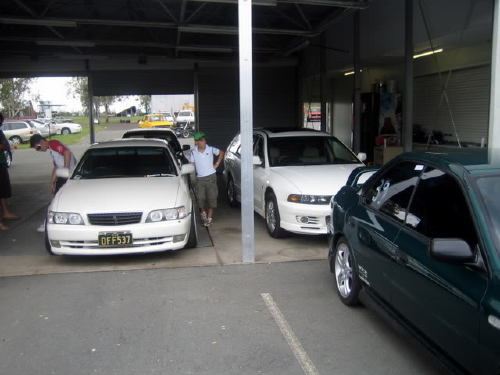 There were only three of us in the 4WD class - myself, the Evo mentioned above and an STI WRX. I knew from the start I wasn't going to be competitive but these guys were REALLY good - made me feel very slow! But definitely motivated me to improve my driving skills and the performance of the car.

It was very well run with two groups of 20-25 cars cycling between different courses. There was a big range of cars from home made kit cars to a learner driver in an old alfa to a Z4 roadster.

Sadly, my day ended prematurely when my power steering broke at the end of my 6th run I heard a squealing noise and then lost all power steering. The belts are all on and there is no noise when I turn the wheel so it looks it's the pump (which is a common failure according to a search on Club VR4).

So I'm a but bummed about that but hopefully I can source a new pump from NZ and get it swapped on without forking out too much $$$.

I definitely recommend everyone giving it a go as it's a fun, inexpensive way to learn more about the limits of the car and your own abilities.


Here's some clips of a few of the others, unfortunately the clips of the Evo is very blurry


The club website is www.hsccq.asn.au and they are having their next one in March. You can pay for a single day license to try it out or sign up for a year and also get a CAMS license if you like.

G'day Lee, looks interesting.....What sort of events did they do???

it was time trials through varying short tracks made up from flags. It's kind of hard to describe the tracks in words but they were made up of hairpins, slaloms, 360's, reverse slaloms (very hard to do quickly!!) with start and stop "garages". You have to come to a complete stop in the finishing "garage". You get time penalties for hitting flags, going the wrong way and not stopping within the garage at the finish.

Just on my 2 hour break (every 10 mins), lol... I'm looking forward to doing a similar event they have out at Hidden Valley in about a month's time or so.

Lets hope my VR-4 doesn't suffer the same fate as yours! Hope your PS won't cost too much.

motorkhanas are awesome fun! i used to compete in these (not a proper championship, more of a come n try event and the car club i was a member of recorded our times and made it our own little comp.

4WDs arent the best for motorkhana, given that you cant really do handbrake turns. I was in my fwd 1.8L lancer and did Ok - posted faster times then the evo3 and VR4! But was beaten by the mirages!

I really recommend it to give it a go! Its pretty cheap motor-racing and doesnt have the same toll as you would taking it to a track day.

Nice work on giving it a go in a Legnum Lee, im sure it wasnt the easiest thing getting that bus around the cones! I'd love to take my Suzuki out for another go at it, but I dont think they do motorkhanas in adelaide anymore.

Do you think the power steering pump went as a result of the motorkhana, or would it have died eventually anyway?

Simon: from the CAMS stewards site:

gilly said:
Do you think the power steering pump went as a result of the motorkhana, or would it have died eventually anyway?
Click to expand...

You did used to be able to hear the pump when on full lock but I don't know if that means it was on it's way out.

I was pretty hard on it I guess I got some nasty sliding understeer during a couple of runs and then that clover shaped course in the vid (which is just 5 big 360's) must've finished it off.

As you say, a VR-4 (especially a Legnum) is not the best motorkhana car and if I was going to get into it seriously I'd want some small and light. But it was still good fun
G

So you still drove home OK with the busted power steering?
B

virtually everyone that has killed their PS pump has done it doing donuts, so maybe they just don't like it....

__ET__ said:
So you still drove home OK with the busted power steering?
Click to expand...

Yeah it's fine until you turn more than 20% from centre then it gets really heavy so down the highway (90% of the trip home) was fine - getting into my tiny garage was a struggle and a carpark would be a nightmare.

bradc said:
virtually everyone that has killed their PS pump has done it doing donuts, so maybe they just don't like it....
Click to expand...

do you know if anyone has looked into a stronger replacement pump from another Mitsi?

no idea, wouldn't even know if the evo's are even close to being a drop in part

I know LUCAS power steering stop leak is an additive that will make the fluid thicker but have no idea what thicker fluid would have performace wise? AMSIOL+LUCAS?
Or is it best to keep it nice and clean and thiner(normal) as it should be?

Well done Lee. You do learn alot about your car and how it and you perform!

Sorry i couldn't make it, i'll come to the next one!

Love it Lee, me and my house mate have always wanted to have a crack at motokana's, they look like the best fun, until you break somthing

nice vidz.. bugger your PS failed on you.. but I do hope replacing it wouldn't hurt that much.. also the labour of removing and puttint it back together..

i'll see you on wednesday..

Yeah Kempys have quoted $175 plus postage + gst for a pump - so then there will be some PS fluid and some labour (unless someone helps me do it for free... HINT HINT )

So not too bad - but still makes my cheap $30 motorkhana outing a lot more expensive!

Yea motorkhana is great fun, i had grand plans for the r31 til i was releived of it. Unless you have serious power in you awd, you cant really pull off the handbrake turns But as has been said, its a seriously cheap way to go racing.

Would hillclimbs be less taxing on the car? I did one, you do need to splash out on a helmet, stickers and a fire extinguisher, but its also a pretty cheap motorsport.

bogan bob said:
Would hillclimbs be less taxing on the car? I did one, you do need to splash out on a helmet, stickers and a fire extinguisher, but its also a pretty cheap motorsport.
Click to expand...

Yeah I was thinking on finding one of those next and giving it a try - should be kinder on the car I think.
You must log in or register to reply here.
Top Bottom