Hi All. I have a 2002 FL Galant with 175k on it that I've had since 100k.
It's lived a charmed life with me the 2nd owner in Oz, and the previous owner being as fussy as I am.
It's had all the regular services, top fluids etc. and the wave spring / tig pins etc done at 110k. Trans cooler fitted as soon as it got to the country at 70k. Paddles fitted.
Never been on the track, hardest time it ever had was probably on the dyno with tuners.
But recently its developed a drivetrain noise when cruising along at 60.
You know that diff sound when you get in a taxi with a billion k's on it and it gets up to speed? That "bearings not smooth", worn out drivetrain sound.
Except mines coming from the front.
It does it all the time, regardless of load on the drivetrain. Doesn't get better or worse with load. Fluids are all good, no metal.

I took it to MV autos and Michael firstly couldn't hear it on the road (middle of the day + too much tyre noise) and then he investigated on the hoist. Diagnosis was maybe some sort of output thrust bearing on the trans. I'm not so convinced. He didn't quite sound convinced either.
Jonson said "typical drivetrain noise for a VR4 with that many kms"

I think it sounds more like a diff or transfer case. That big gear noise.

The only other thing I've noticed it going from 1st to reverse gives a fair bit of slop and the old uni "tink".

It's getting louder and really starting to piss me off to the point of turning the stereo on. And after all the money I've tipped into it so far, I hate hearing it sound like a Melbourne taxi.
Or maybe I need to just accept that I've had a good run but now it's an old car and I've worn it out?

Anyway, I know it's hard to diagnose over the net, but a couple of questions if I could.
Has anyone ever had a similar noise with same amount of kms? That worn out drivetrain sound? Any ideas which component I can throw at it to make it good again?

If it is the front diff, is diff inside the transmission ie: go a manual conversion and new diff comes with the new box?

Drain your transfer case oil
very common for people to underfill them as they airlock when filling.
Often can only get 200ml or so before it starts leaking out the fill hole which isnt enough!
I always force 1l of oil in with a oil syringe/sludgegun/pump. Then drive round the block and open the fill hole again and let the excess drain out.

Thanks Adam for the reply. Your advice is helping me eliminate things which is helping me solve it.
We did change the TC oil when it was at MV's. Looked okay. And I changed it again recently when I thought I had a leak (turned out to be engine oil dripping down).

So, when I say a "charmed life" I have probably been forgetting about this : 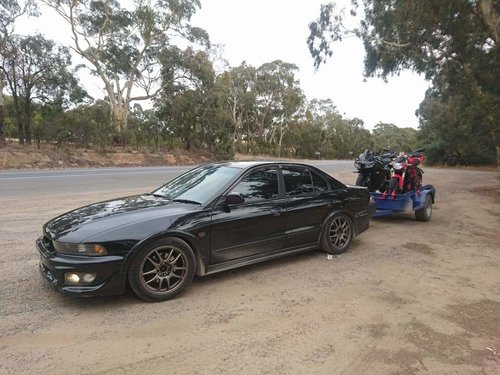 I've done this trip Adelaide/Melbourne twice now with 2 bikes on the back.
Probably 700kgs of towing on the Auto trans.
Strengthened or not, probably the reason it sounds fucked now.
Sound logical?

Even if it is just the front diff, probably not worth changing just the diff. I think that's a trans out job?

Do you have a trans cooler. They dont like towing much without a cooler. Tend to fry the fluid.
You must log in or register to reply here.