Guys I've uploaded the AYC Service Guide that we've had kicking around for a while. Remember, in terms of EXACT components and locations this guide may differ slightly to your cars, as this is from an EVO Service Manual. Once the English translation of the 6A13TT Service Manual is complete hopefully we can replace this with the exact one for our cars.

For now, this is quite helpful if you want to replace the AYC fluid or bleed the system.

Here's a guide with step-by-step instructions showing how you can service your AYC diff controlling the pump and valves electronically.

I'm getting error code 40 from the AYC on my car which isn't listed in the guide - would the error codes change between cars? Would we have the same AYC ecu as the Evo 4/5 in the guide?

All good questions, Lee! Maybe ClubVR4 will have the answers? That's where this came from originally, so hopefully they'll know a bit more about it.

Yeah, I couldn't find AYC error code 40 on ClubVR4 - they have a decent list of codes but I don't think they have managed a complete list - lets hope the Japanese workshop manual will come through on this one!

Lee I took a look through the Japanese manual and it doesn't list Error Code 40 either dude...

Just comparing the Japanese manual with this AYC service guide, they're extremely similar, which is good. On the subject of fluids, this is interesting: 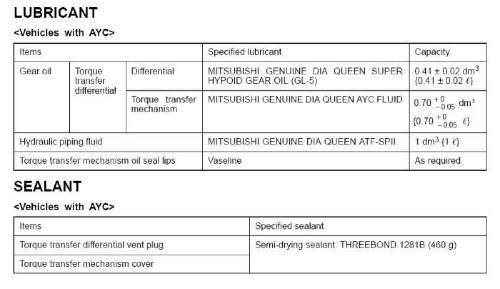 I've updated the Parts Guide with the part number and pricing on AYC Fluid from Amcap in WA. Not exactly cheap stuff...

But what is Super Hypoid Gear Oil (GL-5)? Is this the transfer case, that Gly used Royal Purple Max Gear 75W90 in?

SiliconAngel said:
Lee I took a look through the Japanese manual and it doesn't list Error Code 40 either dude...
Click to expand...

SiliconAngel said:
But what is Super Hypoid Gear Oil (GL-5)? Is this the transfer case, that Gly used Royal Purple Max Gear 75W90 in?
Click to expand...

I'm a little puzzled with the bleeding procedure. It says to lift the car, then turn your steering wheel in one direction, then open the bleeder. It doesn't mention having the car running or anything like that. How is turning the wheel going to have any effect on the ayc system when the car isn't running? What am I missing here?

Murph said:
I'm a little puzzled with the bleeding procedure. It says to lift the car, then turn your steering wheel in one direction, then open the bleeder. It doesn't mention having the car running or anything like that. How is turning the wheel going to have any effect on the ayc system when the car isn't running? What am I missing here?
Click to expand...

Yea I noticed that too, Justin. I assumed there was something I hadn't read as I haven't read it from front to back yet. I believe you have to have the car running and in-gear to get the AYC pump to work, or you need a MUT-II (the safer, professional way to do it). Or option number three is to provide direct power to the AYC pump, which seems far more logical and I'm going to attempt sometime soon. Either way, the pump must be working otherwise you can't force air out of the system... Well, unless you use a manual pump of some kind.


Murph said:
So is this "AYC fluid" sold by mitsubishi in australia as "AYC fluid"?
Click to expand...

Mitsubishi doesn't even know what that is, as they don't officially sell a car with an AYC system (well, not until the EVO X this year). But if you provide them with the part number they can look it up, which is how I found it today

I don't, however, have a part number for the 'Super Hypoid Gear Oil (GL-5)', so they were unable to find that one for me, hence the confusion. I might go chat to a lubricant specialist tomorrow if I get some time.

I'd take a stab and say there wont be anything special about the oils for the gearbox/transfer case/main diff housing. Find out what the weight is of this GL-5 and buy a quality oil of matching weight...

Murph said:
Find out what the weight is of this GL-5 and buy a quality oil of matching weight...
Click to expand...

That could prove quite difficult, as the sum of my info on that oil is what you see in the pic above...

leebutts said:
Weird - I could swear it was 4 long flashes - I'll go and count it again...

Ok, checked again just then and the code is 41, I'd missed the short flash after the 4 long ones.

So there's obviously something suss with my TPS:

yep, something silly with your throttle position sensor

On the oil front, its all good - I spent a couple of hours today chatting with Dean Harrison who has over 30 years experience using Amsoil. MAN does he know his stuff! Learnt a hell of a lot about lubricants today, but the best thing is I should have Amsoil lubricating every part of the car in short order
G

Just been talking to the only guy in my area that is Good enough to look at these cars...

He actually worked for Ralliart as one of there Mechanics...

Now has a workshop here in Bathurst. Specializes in Evolution Lancers.

Spent some time talking to him about various things, AYC to be specific.

He still uses Ralliart as his supplier of parts etc. (Best mates with the bloke)

And they use a BP product SPS2 for the AYC...

Just wondering what other people have found out, or is the genuine Mitso MZ102520 the only option, as this guy uses this in all ralliart AYC, lancer/galant/legnum.

Steve, the official replacement for the genuine AYC fluid is Mitsubishi Diamond Queen ATF SPIII. I discovered that Mitsubishi in the UK mandated this change to all VR4 and Evo AYC diffs over there a few years ago, as their ATF SPIII is the replacement (and slightly superior) product for the original AYC fluid.

The only other product I've heard of that meets or exceeds the Mitsubishi ATF SPIII spec is Amsoil's ATF SPIII. Its the only ATF that I'm aware of that is HFM (High Friction Modified) which was a requirement in development of the lubricant by Mitsubishi (or whomever their lubricant contractor was). Generally speaking other ATF's are NOT compatible and should not be used.

Personally I've never come across BP SPS2, so I can't give you a concrete answer one way or the other. I will say this, though - ensure you do your research and you're 100% CERTAIN a replacement lube will do the job before you put it in your car. AYC diffs and pumps are very expensive to replace, and use of incorrect lubricants will cause wear and damage.
B

BP do make mitsi's oils, so it might be identical

How interesting, I didn't know that! Thanks Brad

Just did some checking - BP do indeed make Autran MMSP-III which is apparently identical to the Mitsubishi ATF SPIII (its on all the correct compatibility lists, at any rate). However I just got a price of $133-ex (or $146.30 including GST) for 20L from a lubricant wholesaler, which is slightly more expensive (per litre) than the $33.33 it costs for five litres of the genuine Mitsubishi ATF SPIII (MR922838) from Amcap.

Ok i've rang a couple of service centres listed on here regarding AYC Service. I've been quoted between $130 - $150. I asked for AYC service so i assume this is a flush n replace of fluids. This seemed a lil cheap compared to what i expected. Has anyone else had this done and how much did it cost? I cant afford any nasty surprises.
You must log in or register to reply here.
Top Bottom