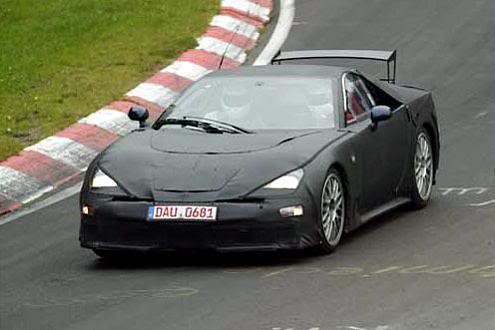 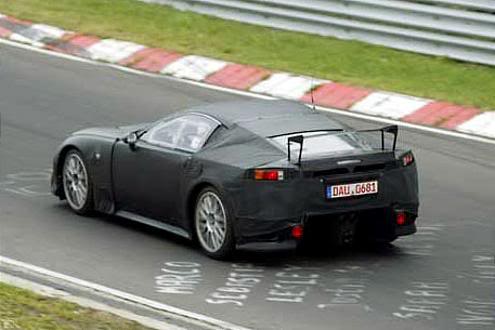 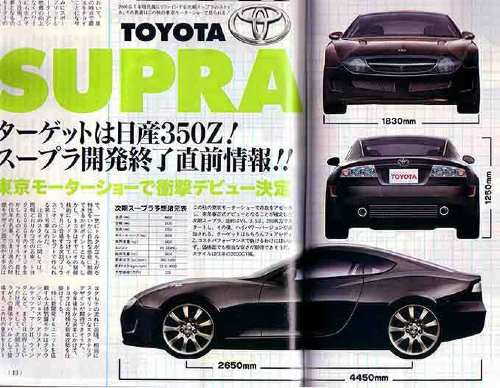 "There will be both coupe and convertible version of the car, probably introduced at the same time. The convertible is reported to have a folding hard top and is intented to be more of a boutique car than a serious sport car. The coupe, however, will be just that, eqquiped with a 5 liter V8 engine producing 450 hp and 383 lbs-ft of torque. This engine will not be available in the open-air model because of rigidity issues. It is said that when Toyota started development of the Supra, it was only a convertible hard-top form with 4.3 liter V8. Later in the process, Toyota opted to go with a more powerful engine. But with the additional came extra loads that the convertible couldn’t stand, so the company was forced to create a fixed-roof version of the car.


The Supra’s suspension is one befitting that of a true sport car: upper ad lower A-arms up front and a multilink setup at the rear. No doubt the tuning of the shocks and springs will be different in the V8 and V6 models, but expect both version to be relatively firm.


Toyota will have a car that’ll eclipse the performance of the Nissan 350Z, Mazda RX-8 and Honda S2000. Look for the Supra to make appearance in October of 2007"

Will it be sold as a Supra in some markets?

The details are sketchy, but I think it will be badged as a Lexus.
G

It will be interesting what they call it in Oz? probably a Lexus so they can charge more

I like this thing a lot, and a 5L V8 would be a pretty good power plant
S

It looks hot, which is a nice change as so many new cars look like fogs balls.

it somewhat reminds me of the new Lexus IS250... but of course the pictures above are just 2 doors...

Wowsers! No offense Hawks my good man, but your info's unfortunately quite old, especially the image from that magazine spread. The car in the photos from the Nurburgring is the Lexus LF-A, and can be seen in more detail here.

That said, there is talk about an upcoming Supra - and this latest batch of rumours is more solid than they've been in the past few years. It's rumoured to be based on the FT-HS concept that they showed recently (though presumably the visual styling will be a hell of a lot less "out there" in the final spec), and will be a hybrid.

Considering a hybrid Supra just kicked a whole lot of arse in the Japanese SuperGT series, the word "hybrid" isn't a dirty word in the sportscar world anymore, that's for sure!

A couple of more links.

that does look good, pity it isn't turbo'd

I knew you would be on top of this van, you seem to be the go to guy for all things japanese. Whatever its called or looks like, it's good to see something exciting come out of Japan. Now that Nisssan have turned soft, everyone else needs to lift there game !!!
G

Haha nah, I just have a lot of car news sites coming into my RSS feed, so it keeps me up to date whether I like it or not haha. Handy though!

I wouldn't say Nissan's gone soft, the new GT-R - despite it being fairly ugly - is a hell of a machine by all reports! And the next Z is on a shorter wheelbase apparently, as they're aiming to return it somewhat to its original sportscar roots rather than the GT car that it's been for the last couple of decades. There's also talk about a new Silvia, so that's interesting as well!
S

No Turbo - No interest!

I can buy a commodore locally if I want cubes!

The new Subuaru BRZ aka Toyota 86
2